Okay, so I know that I am a little late getting this photo up as I finished this last weekend – but hey I have been busy sewing. Geez I love holidays. Anyway, I have finally finished my forth corset. This one I made to go with my pinstripe fishtail skirt that I wore to the Victorian train ride. I have also put together a pinstripe bolero jacket to go with the whole look. Now I just need a place to wear it.

Anyway, back to the corset. It is made of 4 layers of fabric; the lining, the interfacing, a peach satin and the black embroidered net over the top. The netting gave me the most trouble. As it is an embroidered fabric, when you cut it, it frays all over the place making a huge mess, and meaning I cannot sew with the fan on. (Not an advantage in the middle of summer) But after much cursing, I managed to get the corset fully put together. For the exterior boning casings I used black satin ribbon as it complimented the embroidery really well. Unfortunately, this meant that I could only use the light boning inside them. So needless to say that the corset is not really up to being tight laced. However I did not really intend it to be, as it is more designed as an exterior wear not as an undergarment. Which actually makes me glad that I did not lower the top otherwise my boobs would be hanging out indecently. One alteration I did make on the pattern was to extend the hem (me and my high waist did not work originally). So now my corset is quite a bit longer which gives me more the desired shape that I want. Though I still have to make a couple of changes – namely drop the top down a bit and taper it in at the bottom as it flares out a bit too much.

I also inserted my very first busk in the centre front. In the past I have used hook and eye tape, lacing and open end zips. I was surprised at how easily it went in. I think I had built it up in my mind as way too hard and I was very worried that it would not work. Though I have to say it was really simple, and I was happily surprised. The only addition I made to it was to stuff some heavy boning down the hole with it because it was just a little too flexible for my liking.

But I still love my corset, and am so happy about how it turned out. Though never again with the lace stuff. 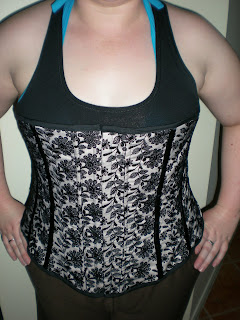 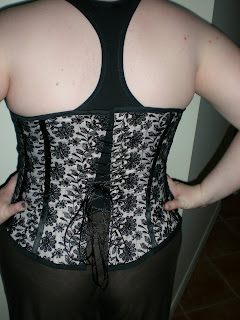 Only 1 more day to my holidays

Okay so I know that it sound like I am bragging, but I am just really excited about my holidays. It has been way too long since I had any decent amount of time off and I am really looking forward to spending some peaceful days at home. Between baking and sewing, I should get heaps done. I intend to make a start on some of my sewing projects for next year. Though I will have to hit up a couple of fabric shops to get some of the missing pieces that I need. But so that I remember the projects that I intend to make I am making a list (and checking it twice).
1940s red Christmas dress (December 21st)
Steampunk Costume (January)
1950s swimwear outfit (January / February)
I dream of Jeannie Green Outfit (February 16th)
American McGee Alice (April)

And those are only the ones that I can think of at this stage. I would really like to get some of my other fabric bits cut up and made. I mean I buy the fabric for specific costumes and I would like to get them made up rather than store them as fabric. And of course, once they are made, there is room for me to buy more fabric. But the most important thing I need to get done is to make the cushions for my parents Christmas presents. I have the fabric. I just need to cut it out. But I have been waiting for a time when no one is home so that I can do it as a surprise.
Though, I need to cut out all of my fabric. I intend to dedicate Friday this week to cutting out fabric. I am just going to set myself up in front of the DVD player and cut fabric all day. I know it sounds a bit strange but I sit on the floor and use the coffee table for cutting out. It’s the perfect height and I would rather cut out a heap of stuff rather than just one thing, as I really hate cutting out fabric. I would rather be sewing it up. So I try to get as much done as possible while I am at it. And then when I feel like sewing something, it is already cut out for me.
Posted by Mel at 5:52 PM No comments:

I had every intention of putting these photos up last night when I got home from skating. But I was exhausted. I ate dinner, showered and went to bed. There was just no energy left in me to put them up. But anyway, I am only 1 day late and here they are. The photos I have from out ACG Queensland Christmas Party. Skating. Which in itself was an interesting experience for some. We had 16 in total, and all of out members dressed up. My brother did consider coming dressed in his Spanish inquisition costume, but I didn’t give him enough notice. You would think that me bringing it up 2 weeks in advance he would remember that I was going out. But it wasn’t until 1.00 on Sunday afternoon after mum had mentioned that I was going skating that he decided he knew. So he didn’t come.

But we had fun anyway. With fabulous costumes on. 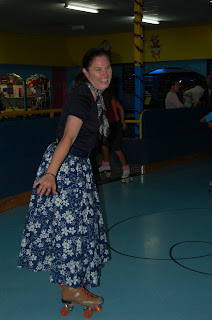 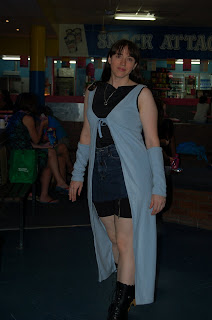 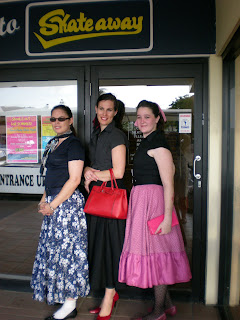 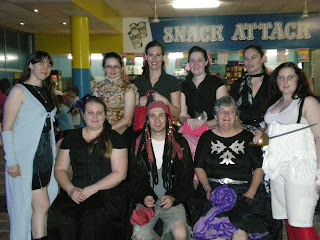