Well, the previously mentioned fairytale costume party has progressed further in the sewing department. I am still working on my Puss In Boots outfit but am pretty much finnished with a Mad Hatter Costume for my dad. (I only need him to try on the pants so I can hem them).

Basically the costume is a tailed coat, with a vest and tie. And check pants. I tried to pick some colours that would hopefully clash really well together, but still be workable for future use. (I don't make these things for nothing.)

I used a peacock corduroy with a fine pill for the jacket. The tails were not supposed to have an inside lining, but I thought that it would look unfinished if I didn't add a lining. So I just bought more of the cord and lined it fully with that.

Another thing that I changed from the original pattern is that I didn't do the sleeve hem as specified. My dad has long arms (A trait that runs in the family) so I didn't want to make the sleeves any shorter. Instead, I used purple bias binding and stitched it to the inside. On the exterior the hem just looks like a single fold 1cm hem, but then you get flashes of the contrast purple binding when you move. Very cool.

I made the purple vest out of a cheap satin. It's an acetate fabric, so it's cheap and a lot stiffer than other satin fabrics, meaning that it will hold shape a bit better and not stretch and fall like most satins. The only thing I changed about the vest, is that it was supposed to have a dickey attached. But I wanted to use a contrast tie (bought), so I didn't put it in, but instead just attached a piece of black elastic to sit behind the neck.

I intend for him to wear a button through shirt underneath, so the collar and the tie will cover the elastic. I went with elastic so that it would be a little more comfortable and allow for movement. So far it looks pretty good and I am happy with it. All that is left to do hem the pants and make the hat. Which is a whole other issue as I am having trouble buying the foam to make it out of. 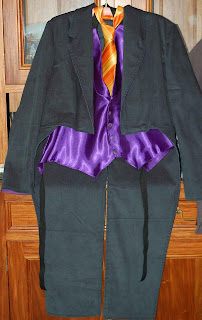 I guess the first thing I'll go into is that at the moment I am planning a costume dinner party. To be specific, a fairytale dinner party. Complete with decorations, full outfits and a mad hatter tea party. I am making 4 costumes. A Mad Hatter, Cinderella's Fairy God Mother, A Fairy (inspiration - think the Green Fairy in Euro Trip) and Puss in Boots (Me).

My puss in boots outfit is inspired by Shrek 2. Mainly so I can have a sword. Though as a person, and not really into wearing a skin-tight outfit from cats (the musical) I plan to wear black tights, and a billowy cotton shirt.

I just finnished making the the cape this morning - black polycotton with red bias binding around all the edges, and pleated into the top (instead of gathering). I also made a fur hood with ears and tail. The hood didn't turn out quite like I planned, so I might have to change it.

The tail however looks neat. I will post photos once I manage to finish the whole costume. The pieces by themselves look kinda strange.

For the makeup I plan to do something similar to the makeup from the musical cats. Very stage makeup style, but I will blend it in with the fur fabric colours, and bring white down over my chest to blend in with open collar of the shirt. Hopefully everything will actually work. More later.... 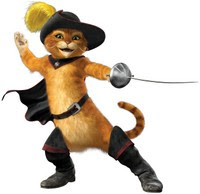