Well, my great Egyptian plans fell through. I was getting set to go on everything and I got sick. Again! I ended up spending the day in bed instead of work and was in no condition to go out at night in the cold wet with a head cold. I fully intend to wear my wig and costume at some point in the future, though after trying my wig on a couple of times, I realise that it needs a few adjustments. Namely it is too full at the crown of the head. Instead it needs to be flatter over the top with the bulk at the sides. But this is just a matter of brushing out the current style and having another go at the styling.

Thankfully though, I am mostly better now with only a slight cough left. And just in time to. This weekend sees me heading down to Adelaide for the Australian Costumers Guild ball. When it came down to costume decision, I chose to go with my White Queen. I put a lot of effort into it when I made it earlier this year and I don't really get to wear it much as it is a character costume instead of a historical one. The only change I have made is to purchase a new wig to go with the ensemble. It has been a huge relief not making something new to wear for the ball (no stress!) but I have put my time to good use, making vintage dresses. It's my intention to wear vintage the entire time I am in Adelaide. We are planning to go to a Vintage Fashion Fair on the Sunday, so I have whipped up a new 1920s dress for that (with matching hat). I've also pulled together a new 1930s dress and a 1950s dress. I am very excited about the weekend and am so looking forward to it all.
Posted by Mel at 9:52 PM No comments:

In a previous post, I mentioned that I my next upcoming project is for a Roman feast that I will be attending. I spent 2 weeks hunting around online researching the different ancient cultures trying to decide what I could wear and what would look flattering on me. (Not much, I tell you now). I came down to Egyptian, but it was all contingent on the wig. If I could get the wig looking good, then I would make the rest of the costume, because without the wig, it would all look kind of plain and boring really. (Inspiration photo for my wig on the left).

So, last weekend, I got stuck into getting my wig ready. After cleaning up my costumes on Friday night, I went through my box of wigs and pulled out my two longer black ones (the short black bob will never be changed!). One was from my American McGee Alice costume, and wasn't really the correct cut or colour, so I didn't mind donating it to the experiment, and the other was a long-ish black wig that I bought with the intention of using for a Wednesday Adams costume. Both wigs were dead straight synthetic fibre. I spent most of Saturday combining the two.

The reason for this is that one wig simply does not have enough hair in it to get the look that I want. I decided that I would be cutting up the long one (because it had a fringe) and sewing it into the shorter wig. In hindsight this ended up being the better option as the shorter wig had more rows of hair in it, and it was a better wig all over. It's difficult to explain what I did without pictures (stupid me never thinks of taking progress pictures) but I will give it a shot. 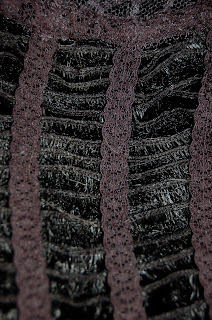 If you have a look at the inside of a wig, it is made up of a front, back and side base of lace with hair sewn on and strips of elastic running down the length of the scull which the rows (or wefts) of hair are sewn onto. I basically just started chopping it up. I started at the bottom so that I would be able to comb the hair down into place when I was done. I would recommend this at any rate for future note, as I think it would be a nightmare to start from the top. But I basically just pulled off the wefts of hair, and whip stitched them onto the corresponding wefts in the other wig. It was really quite simple, just very time consuming. In the end it worked out rather well.

My next step was to style my wig. I did a bit of research and read a few forums about how to curl wigs (I wanted to crimp mine) and discovered that people recommend setting it with how water. I plaited my wig up and put the kettle on. I dumped the wig into a large bowl and poured over the hot water (not boiling, but starting to). I stirred it around with a wooden spoon for a while to make sure that all the hair was under the water and left it for about 10 minutes just to make sure the water had gotten into the plaits. I then took it outside, and propped it up over a chair to dry.

Once it was dry, I started unravelling all the plaits. And low and behold, it had actually worked! Again, I didn't take any progress shots, but you can see a bit of the crimp still in the wig. After that, I just started styling my wig. I was really aiming for a very full wig that looks almost like African hair (the Egyptians loved Nubian hair for their wigs). So I popped it onto my hairstyling head, and started on in with the teasing and hairspray. I was mainly brushing out the crimp to get a bit of a frizz and then teasing up the upper lengths to create the fullness. I even managed to get rid of the slight centre part in the wig. More hairspray to hold it in place... 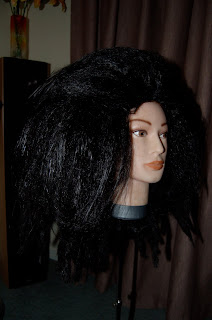 And to finish off, I wanted to dreadlock the ends. I didn't really do this in a uniform fashion, I just grabbed a sizeable hunk, rubbed in some hair wax, teased, rubbed, teased and rubbed until I got the dreadlock look. This was the most awkward part of the whole process, mainly because I was hoping like hell that it would work as up until now, I was happy with my results. But I kept going around. After I was done, I grabbed out my sharp scissors and lopped the ends off the dreads so that they were the right length and neat looking at the ends. A couple final coats of hairspray and we have my wig....

Now I just need to make the wired / beaded headband. Basically these were used to keep the wig in place on the head. Me, I went to the junk jewellery store and bought a necklace to pull apart.
Posted by Mel at 9:20 AM 3 comments: