My final puss in boots outfit...

I did make a few final changes to my original plan. I made a pair of brown tights as the legs instead of black. I figured that otherwise,there would be too much black in the costume and I would disappear into the night. Also the headpiece I made, I ended up changing. One I tired it on, it just looked wrong. Too much like a bear head. So instead I attached black cardboard to
a black headband and arranged my hair around the ears so that the headband could not be seen.
For the shirt, I used a robin hood type of style and pattern. The only difference I made to the patterns was that I didn't do the lacing up at the front near the collar and instead of elastic or a cuff at the wrist, I thread red ribbon through and then pulled it tight and laced it up my arm.

The tail looked awesome, however I made it a bit too long and it dragged on the floor too much. Meaning that by the end of the evening there was food, dirt and something sticky I would rather not investigate on the end. Note to self - shorter tail next time.

The hat was another complex part of my costume. It didn't take overly long to make, it was just annoying in that I had a lot of trouble trying to get the wire into the casing for the brim of the hat. Turned out my wire was too thick. Once I got the thinner stuff in there it was smooth sailing. Small change that I made to the pattern was that instead of turning under the brim edge
to create the casing for the sire, I used black bias binding. Could probably have used red and it would have looked really good.

My favourite part though, was the makeup. I based it off a makeup design from Andrew Lloyd Webbers' Cats The Musical. I am a makeup artist, so that did help me in doing the makeup. Thank God. I probably would not have done a cat character if I could not have the awesome makeup. It was surprising, I could not tell that I was wearing it, aside from the looks on everyone's faces.

I used a Kryolan white pancake makeup all over my face and neck as a base. I then used brown powders and bronzer to add in the facial shading under my cheekbones, at my forehead and in a round shape at my eye. I then used brown pencils to draw in the impression of whiskers and fur. I then applied black mascara and drew in my new cat eyebrows with a black liquid liner and brush. I also painted in a almond shape on my upper lash line, and a few millimeters below my lower lashline. I then painted in my nose and drew just above my top lip, and add whisker spots on my upper lip. I then applied very thick elongated black fake eyelashes. Surprisingly, it did not take me too long to apply. And the result is as you see. 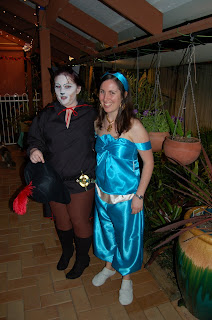 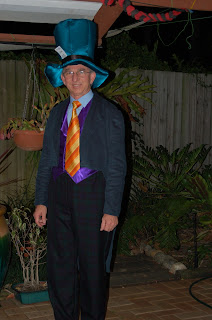 As I mentioned, the central theme of my fairytale party was a mad hatter tea party. This was my dad. Lets get into the making of the costume. I was actually surprised that it did not take me a lot longer to make the costume. The pants were simple, just an elastic waist pants. And the shirt underneath was just a regular long sleeve workshirt. The tie I bought from a discount
outlet (I wanted something that would clash rather well) and the vest was simple.

The hat was another matter all together. After tracking down the foam I needed to make the hat, I thought it would be smooth sailing from here. Unfortunatly not, I had chosed a soft charmeuse satin to make the exterior of the hat with. I did want to use a heavier satin, but could not get it in the right colour. The biggest thing that posed a problem was that the satin kept slipping. I stitched it to the foam, but still found that it would slip out of alignment and thus out of the seams. I'm actually rather happy with the way it turned out, I ended up getting the seams in (with much unpicking and frustration). It looks great but next time I make that hat, I will think twice about the fabric I use.
Posted by Mel at 4:56 PM No comments:

Well, I had my fairytale dinner party. It was a lot of exhausting work, but so much fun. I had a total of 14 people at my party, quite a lot of hungry mouths to feed. But I was so glad that everyone took the initiative and dressed up. All my costumes came out well. I made the Fairy, The Mad Hatter, The Fairy Godmother from Cinderella and of course my puss in boots outfit. Which you will see in another of my entries.

My decorations were inspired by fairy tales. I had a yellow brick road running up the driveway lit with tea light candles in brown paper bags. The trick is to fill the bottom of the bags with rocks or sand to hold them out. Although, as is the case with paper and fire, a few bags got a bit burnt. My yellow brick road was made of bright yellow wrapping paper cut into rectangles and stuck down onto the ground. And once you arrived at the end of the road I had a mad hatter tea party set up (hence the Mad Hatter costume). I spruced up the area with some black and red crepe paper chains, and some large playing cards stuck to the wall. I also had 3 paper Chinese lanterns set up above the table. Leftover from a birthday party, I painted them with red and black acrylic paint with hearts, spades and clubs. And a light bulb running into them added light to the space. I then had 3 tables joined together to run down the length of the area, seats surrounding. Each place was set with knife, fork and spoon, and an individual tea cup as a place setting. I painted the teacups to have a heart, spade, diamond and club and with a small tea light candle, to light up the table space.

To spice up the evening a bit, I also had games for everyone to play. I tired to keep with the fairytale theme, but I could not resist having a pass the parcel. My centre prize was a my little pony. And on most of the layers I add a forfeit (something embarrassing that the unwrapper must do). I also arranged a malteasers game, with straws (kind of a suck and blow type
thing). We played a team fairytale questions game and then fairytale celebrity heads. I know games seem kind of childish, but the whole evening was designed to be fun and reminiscent of your childhood.

Overall, I had a fantastic time. Mind you, I was exhausted the next day... 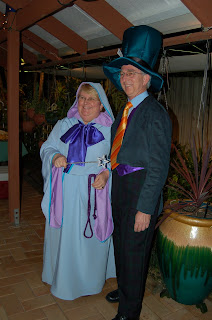 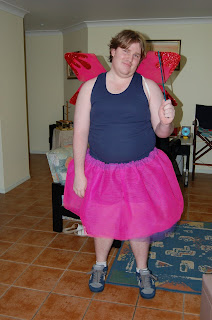