Egypt at the con

It's been a while. But then, it feels like the world has been on hold over the last several months with COVID-19 restrictions. Before it all came into force in Australia, I attended Supanova on the Gold Coast in April - the beginning of what would normally be our convention season. My brother and I drove down to attend for the Saturday of the con weekend. The event itself was on the slow side of things, not as many attendees and quite a few of the usual sellers missing in action.

But, I took the opportunity to finally make a costume that I had planned a few years back - Evie Carnahan from The Mummy. In particular, the library outfit: 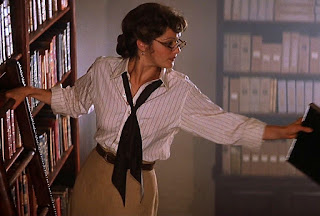 It's a relatively simple costume to break down - skirt, blouse, necktie, wig and props. I butchered a 1930s reproduction skirt pattern to come up with one similar to the movie costume, made out of a sand coloured linen. I did change the design a little, adding in a pocket and side placket opening as zips were not being used in women's clothing at the time (they were considered to "easy"). My shirt was made out of a quilting cotton in a similar print to the film version. Again, I altered a couple of patterns to create a mens style shirt. And I made a necktie out of some brown silk in my stash.

My only purchases in preparation of the costume were a belt, glasses and key prop. Though, I had purchased the fabrics for the shirt and skirt a few years back. It was a spur of the moment purchase that I made online when I was watching the movie. I thought it would be a fun one to do.

I was right. And my cousin took some fantastic photos for me at the event. 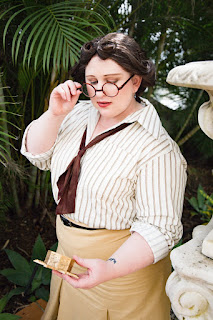 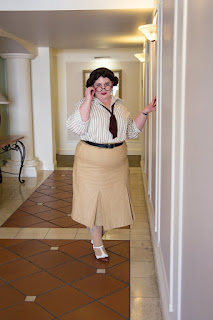 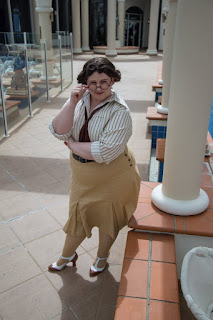 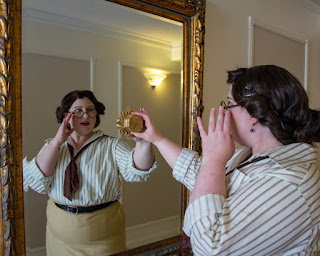