I still haven’t gotten back into my good blogging habits.

A few weeks ago (in May) I decided to attend the Madman Anime Convention in Brisbane. Cancelled plans meant that I could actually go, and of course that meant that I wanted a new costume. Enter a frantic week of sewing, because yes I made this decision late on the Friday night a week out. I dug myself out of bed on Saturday and headed straight for my fabric stash. I had chosen to do an outfit of Sailor Venus (a casual one). 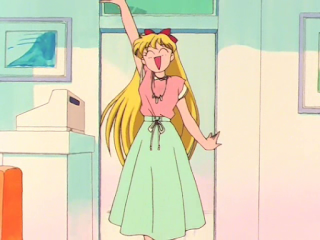 My fabric stash proved on point and I was able to pull out five pieces of fabric perfect for my plans. I needed to get together a t-shirt, a tank top, a skirt, a petticoat, necklace, hairbow and wig. I started by drafting up my patterns. Thankfully these were all simple pieces so didn’t require a whole lot of technical challenge. I started with the t-shirt and cut into my stash of white cotton lycra. Of course the first t-shirt I made has the wrong neckline, so I quickly fixed my pattern and cut out another one (to be later sewn on Monday evening after work). 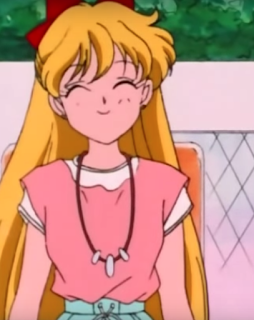 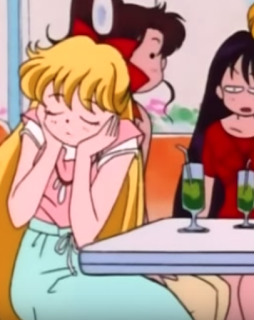 I then stitched my skirt and petticoat. It wasn’t until I was almost done and I tried it on that I remembered the skirts might be too long, so I hacked off what wasn’t needed and rehemmed them, leaving the waistband hand-sewing and closures to later. I generally try to focus on getting my machine sewing done on the weekends. I then made the tank top (twice, because the first one didn’t fit right). I’m still not happy with the tank top and am planning to re-make it, but it just goes to prove that you really should spend the time doing a mock-up. The final piece to make was the hairbow. I cut up some pieces of red linen and made the pieces, adding some wadding into the top part of the bow to keep it structured. 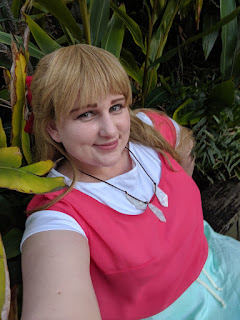 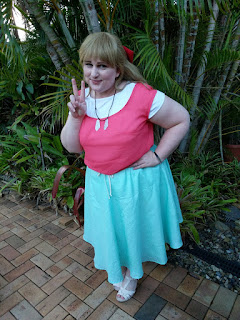 Unfortunately I had to work on the Sunday, so it was a lost day for sewing. But in the end I managed to scrape it all together in time. And thankfully my wig was a previous cosplay wig restyled. I’m rather pleased with how the costume came together and it just proved to me that when I put my mind to it, I can get this stuff done in no time. (Doesn’t mean that I have started on the next project though). 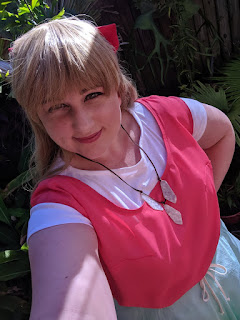 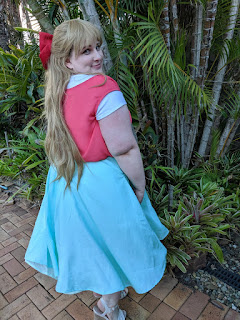 As for the event, it was small but a vast improvement of the Brisbane anime conventions I attended years ago. There was a good range of sellers, and artists section where I spent most of my budget and entertainment. I went with my brother, and we were done after about 2 hours. I do think though that they are on the way to something great. We ended up grabbing Vietnamese for lunch afterwards before heading back to my brother’s apartment for an afternoon of gaming.
Posted by Mel at 9:10 PM