While the job hunting continues, I have been making use of my time to get ahead on my sewing projects, and make a few extra pieces. For some time now, I have been wanting to work on new historical undergarments. In the past, mine were made on a purely functional basis so they were whipped up out of sheeting cotton that I bought for $2 / metre, and they weren't anything special. I've since been looking at extent pieces and how beautiful some of the undergarments can be even though they really don't get seen.

Last week, I spent quite a bit of time drafting up patterns and cutting out fabric, and the first of the new historical undergarments that I decided to make were for my 1900s gear. Mainly because I know that I will be wearing this stuff later in June.

First up were the drawers. They are made out of a pretty pink cotton ('cause that's what I had in my stash). I drafted the pattern up from the scale styles in Frances Grimble's the Voice of Fashion book. The drafting is quite simple once you get the hang of it, I just forgot to double check the length of the drawers as I was going. I solved this problem in construction by adding a few pin tucks at the hem, however, they are still a little bit longer than I would like. The other issue that I had is that the drawers are very wide in the leg. I decided to add a few topstitched tucks on each side which helps to draw them in at the knee. The one feature that I really adore about these drawers is the wide hem allowance at the open crotch. It really helps them sit better and I think they are less likely to rub against my legs during wear. Over all, I'm very pleased with them. 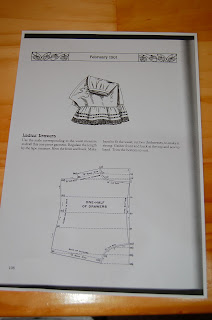 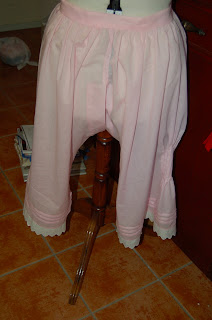 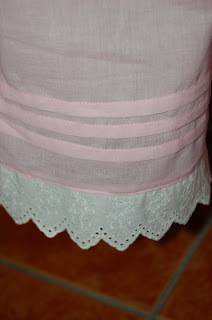 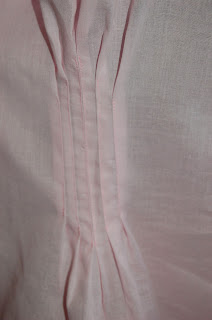 The second task of the day was to whip up the new petticoat. Again, this is a petticoat drafted from a Frances Grimble book that I worked on a few years ago. I really like the shape of it, so thought I would make a nicer version. I really wanted a taffeta petticoat, but I just didn't have anything in my stash that I could use for it. Instead, I decided to use the wrong side of the left-over fabric that I bought for my Rapunzel costume. The only detail on the petticoat is the full ruffle and velvet ribbon where it is stitched on. I really wanted to add a bit of rucheing detail, but the fabric just isn't good for pressing - there is a very fine line between pressed and burnt when I was ironing it. In then end, I decided to keep it simple. The best thing about this though is that it is a great colour for underneath the gown I will be wearing with it - a navy blue gown made from cotton organdy. 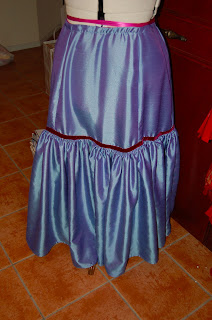 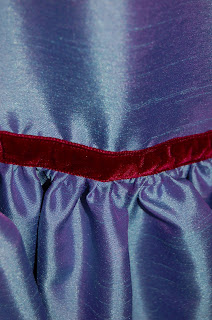 Next on the agenda is a new s-bend corset. It has been started but there are a heck of a lot of boning channels that I have to stitch in. It shall not be long before it is done though.
Posted by Mel at 9:29 PM